“Danzas de Ida y Vuelta,” is a dance and music showcase film that invites the audience to embark on a round-trip journey through Latin America, starting in the Old World and making its last stop in The Bronx!  Filmed at Poe Park in the vibrant borough of The Bronx in New York City, the performance uses narration, songs and dance to embark on a “Round-Trip” voyage that originates in Spain, travels throughout the New World, with its ultimate destination in The Bronx.  Using narration and demonstrations, the performers guide the audience into making connections with songs and dances from Spain, to popular music and dance forms alive today in the borough of The Bronx. 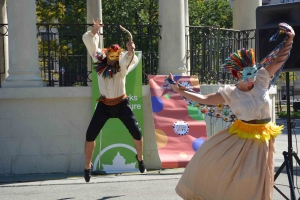